Engineering managers (EMs) might underestimate the influence of respect when working with juniors. Learning how to best respect one another helps strengthen and create authentic relationships. Your team will become more self-aware (in knowing their wants), and your team members will become more curious about one another.

I’ve developed a framework called the 7 Forms of RespectTM to help people understand and articulate their preferences around respect in a work environment. These seven forms of respect include:

Here is what we'll cover today:

The power dynamics of a relationship can impact how we respect and expect to be respected by others.

People who are new to their career often think about how to give respect instead of how to get respect. For juniors, they might feel a lot more concerned and less confident about being able to advocate for themselves as compared to their seniors — the differing perspective ties in with power dynamics between work relationships. The best place to understand hierarchy is by asking, “Who has more or less power?

From this perspective, junior engineers are more focused on how they give respect to others instead of how they receive respect. As a result, juniors naturally lean towards flexibility and being as respectful as possible because they feel they need to be.

Here’s where hierarchy ties in with how to approach respect. EMs should cater their forms of respect to different hierarchical relationships. When speaking with juniors, exercise patience when explaining topics, be explicit about communication preferences, and provide structure and expectations around communication.

A new junior developer starts at a workplace. While learning the tech stack, they’re learning to navigate formality when communicating with managers and peers. During a call with a manager, the junior developer notices that their manager is multi-tasking during the meeting. In mirroring their manager's actions, they start to multi-task during future meetings, which appears disrespectful.

In this case, the manager could explain why they are multitasking, such as a need to stay on watch for emergencies. However, they can also express that they expect the full attention of junior developers in a call so as not to create misunderstandings behind a junior developer mirroring their actions.

Sometimes, mirroring actions help new team members navigate communication patterns in their new workplace. In other cases, mirroring actions don’t work. In this scenario, the manager should communicate their expectations and preferences around attention between different hierarchical relationships while also providing some context behind their actions to avoid double standards.

In short, managers can explain their circumstances while also communicating their wants. Eliminate the guesswork, and communicate more. Remind yourself that “You are the teacher for how people should treat you.”

Directionality (Give vs. Get)

Another important dimension of respect includes directionality or how you give vs. get forms of respect. It may feel hypocritical to treat someone differently from how you want to be treated. My research shows that there is a difference. There’s some overlap between hierarchy, but ultimately, this section reveals that your preferences behind forms of respect can differ depending on directionality.

We’re constantly making choices each day. Some days we have to decide between being late for a meeting with a boss or a report. Our preferences can inform our decisions regarding how we give or receive respect.

Often, there’s a reason behind someone’s preferences in directionality. I once had a client who experienced old managers always being late to her meetings. In her current position as an executive, she prioritizes being on time for her sessions with her reports while being more flexible about being late with her peers, because she remembers what it was like when people who had more power were late to meetings with her.

Similarly, you can also reflect on the “why” behind how directionality affects your preferred forms of respect. There’s no universally accepted way to map out which form of respect works best depending on directionality but based on personal experiences.

Personal Preferences (What Matters To You?)

Some forms will personally matter more to you than others out of the seven forms of respect. More simply put, what matters most to you? There are three levels of condoning and giving respect based on these personal preferences.

Based on these levels, an engineering manager might have varying personal preferences than their team, depending on the situation. If you’re unsure where your preference levels lie, you can ask yourself, “How tired do I feel vs. how energized do I feel in response to forms of respect?”. Of course, not every scenario plays into people’s preferences, so exercise flexibility based on differing scenarios.

The Rubber Band Rule helps visualize how personal preferences play into people’s flexibility around respect. When people work in an environment that aligns with their priorities around forms of respect, they might not need to stretch themselves. As they move closer to their won’t-give and won’t-get level they start to become stretched when giving and receiving forms of respect that matter the least to them. Stretch too far and too often, and the rubber band breaks. 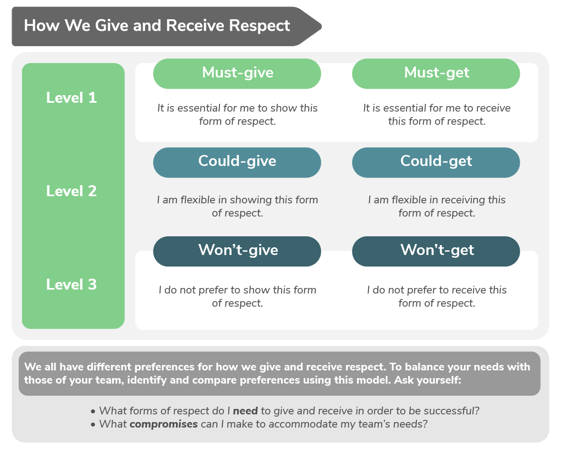 Here are two scenarios that illustrate the Rubber Band Rule in effect.

I find that candor is a form of respect that is a must-get. Asking hard questions energizes me, even if I know it might make someone feel uncomfortable. If I find myself in an environment where I can’t exercise candor, I suppress myself. However, when I’m unable to exercise honesty for long periods, my flexibility wears thin. Ultimately, this might come down to “Not being myself” and “Not being a good culture fit.”

You might be asking, “how do I accommodate or flex to the varying personalities on my team?”. The short answer is you can’t please everyone. When elevating this rule to get team-level results, you might need to compromise personal preferences depending on the nature of the work.

If you’re just getting started with your team, you might consider doing some self-reflection before setting team expectations around varying forms of respect. While my ebook covers the 7 Forms of Respect in greater detail, some helpful questions to ask yourself are:

Open up the conversation with the rest of your team, and receive feedback for each expectation. Start by articulating the current state of culture or ways of doing things on the team. Be open to reason and ask questions such as:

Moving forward, learn to ask questions for further clarification behind an action and be curious about your team. Again, reducing the guesswork, to communicate more with your team. Despite sharing your personal preferences around forms of respect, it’s also important not to take things too personally. It takes time to get to know each other and build a cohesive team culture around respect.

I’ll leave you with an anecdote from a team that successfully adopted the 7 Forms of Respect framework.

As the leader of the group, I found the 7 Forms of Respect to be a really valuable tool for teams to go through. The workshop and assessment enabled us to deeply reflect on how we show respect to one another and to our clients. We also got to discuss what has influenced our sense of respect and in doing so, we became closer as a team. We also have a way of describing our culture to prospective team members as well.

Building vs. managing: Why I took a step “back” into a builder role

The shift into engineering management was slow and subtle, but I became more aware of the differences between being a builder and a manager.

How I get my focused work done

Over the years, I’ve tried many different ways to improve my focused time. Here are 12 ways that work best for me.

People are not resources, whether the job involves putting something on the factory floor or coding things out on the computer.